Student Review by Colin P.: The Adventures of Huckleberry Finn by Mark Twain 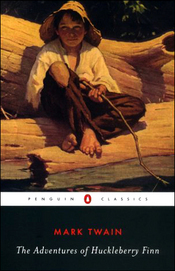 Title: The Adventures of Huckleberry Finn

Summary: The Adventures of Huckleberry Finn” by Mark Twain is a classic novel following the journey of Huck Finn as he escapes from his drunkard of a father and his overprotective caretaker Miss Watson with Miss Watson’s runaway slave Jim.

Colin’s Review: I really enjoyed the comedy of Huck and his buddies who have very low IQ’s. Especially two slimy men that Huck meets who introduce themselves as royalty that had their thrones unrightfully taken from them. I also liked the moral of the story. Huck helps a runaway slave escape to freedom even though he is from a racist time period from a dominantly racist state of Missouri. It was a very tough decision that many people of the time would’ve struggled with. Huck would’ve struggled with it much more if he had to smarts to fully grasp the situation. But the stupidity of all of the characters is what makes it such a good read.

I had no problems with the plotline itself except for a few parts seeming a little ridiculous. However, the version on the “Bookshelves of Room 918” was a classic retelling. According to the people who wrote the version I read, classic retelling means dumbed down so much that a second grader could read it with ease. This book had annotations at the bottom of the page telling you what the word speculating means. And the worst part is when you see one of those you almost feel obligated to look at the definition because you think it might be important. If you were to read this, I would recommend the original version. Other than that, I have no grievances with this classic novel.

One response to “Student Review by Colin P.: The Adventures of Huckleberry Finn by Mark Twain”

I read and use YA lit to help connect with my students & foster a love of reading.

Charting By the Stars