Student Review by Krystal K.: Shatter Me by Tahereh Mafi 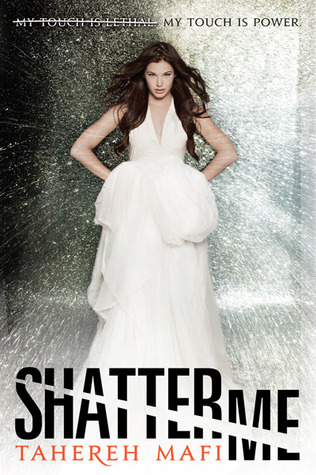 Summary: In a dystopian society, Juliette has a lethal mutation that causes the life of everyone she touches to slowly be sucked from them. She never wanted to hurt anybody, in fact she tried her hardest not to but she was still out cast and eventually put into an asylum away from society. One day, she gets a roommate after 264 days of isolation. Her new roommate Adam (yes, he’s a boy) eases her into talking and interacting with humans since she’s had almost a year with absolutely nobody. After she feels a small connection with the boy, the “Reestablishment” (new dictatorship) come into her cell and transport her elsewhere. Juliette is heartbroken to figure out that Adam is part of the Reestablishment and refuses to talk. They take her to their base where Warner, the head of the Reestablishment in her sector, tries persuading her to use her power against all the people who persecuted her in life before. She refuses profusely but Warner won’t have it. He basically keeps her captive until he’s sure he can utilize her powers. After a while, Adam finally shows Juliette that he only joined the Reestablishment so that he could be with the girl who always took the blame for everything and always took the insults without so much as talking back(so Juliette). Warner admits his twisted love for Juliette, but since she is in love with Adam she refuses him to which he laughs off and says she’ll come around. Adam and Juliette escape, but the Reestablishment is everywhere. They will be found.

Krystal’s Review: I personally liked this book since it is mostly action filled, although I wasn’t too crazy about the hookup sessions between Adam and Juliette since it was just awkward to read, especially when my mom or brother walked in. Avid readers of Dystopian style books like The Hunger Games, Dustlands series and Fallen series may like this book. The twist at the end was just, wow. For the next book in the series: Unravel Me I am hoping for either Adam or Warner to die (not to sound like a terrible person but I’m a sucker for a tragedy) because if Adam dies then Juliette would have only her new Resistance family to lean back on, without the love of her life and would have to raise Adam’s little brother which would be a constant reminder of the love she lost; However if Warner dies then there won’t be a Reestablishment leader so hellbent on having Juliette. Also, because Warner and Adam are the only people who can touch Juliette without any negative repercussions. I would also look forward to the Resistance winning the war against the Reestablishment just because I don’t really like long series. 1-4 books is usually about my limit, even if it is as engaging and fun to read as this one was. In conclusion, I recommend this book because I couldn’t put it down, I had to finish the night I got it and it has action, drama and romance which are the three major genres (minus horror) that make this an intense read.

One response to “Student Review by Krystal K.: Shatter Me by Tahereh Mafi”