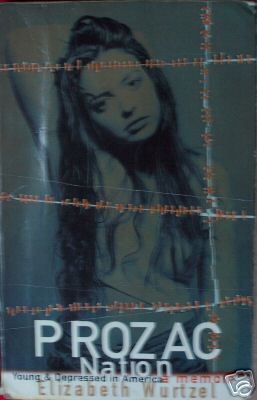 Summary: Prozac Nation, by Elizabeth Wurtzel is a memoir about Wurtzel’s battle with atypical depression. Wurtzel writes about her life as a child with divorced parents, her life as a Harvard student, and the many events that happen between those periods in her life. Wurtzel discusses how it feels to have depression and the constant experimenting she had to go to find just the right antidepressant that gave her a fighting chance in the world. Because of Wurtzel’s depression, she was constantly trying to find happiness when the therapy, hospital stays, and pills wouldn’t help her enough. She tried moving to new places, experimenting with illegal drugs, and dating different guys. Prozac Nation gives tells a great story of a Wurtzel’s continual struggle to find happiness in a world that seemed very dark to her.

Mackenzie’s Review: Prozac Nation was a very interesting book to read. I usually read fiction so this was a very different for me. It was a real-life story and didn’t have quite the suspense and climax to it, but it did pull me in and make me want to continue reading. Before reading this book, I read many reviews online and people complained about how whinny Wurtzel sounded; and yes, I must admit, Wurtzel was constantly complaining but I think she gave a true and honest perspective on how depression feels. People can’t expect to read this book and have it be uplifting because Wurtzel is honest in telling her readers how it feels to have a mental disorder. She doesn’t sugarcoat it. Another thing I really enjoyed about this book is how she writes. Her vocabulary is extensive and her metaphors and similes really make the reader understand how she felt at the time of the event. I would highly recommend this book to anyone looking for a great memoir to read. I would also recommend getting the book that has the Wurtzel’s note that she wrote a year after the original book was published. In her note, she tells about why she wrote Prozac Nation and she answers many of the frequent questions she was asked, which is really interesting to read.